The team of the Regenerative Neurorehabilitation Laboratory collaborated with Northwestern research labs to have an article published in the March 2o21 issue of Science Advances, with the 3D multifunctional neural interface lab illustration on the front cover.

The article explains the full construction and intention behind the research of novel 3D submillimeter-scale interfaces that monitor brain organoids to reproduce and learn of the complex structural features of a brain in vitro. The Regenerative Lab staff, Kristen Cotton, worked with the Northwestern lab staff, Yoonseok Park [et al.] on this project to introduce classes of microfabricated frameworks as neural interfacing for spheroids and assembloids. In doing this, they hope to better learn of the brain’s interactions with the development of the nervous system and the evolution and origins of aberrant behaviors and diseases. 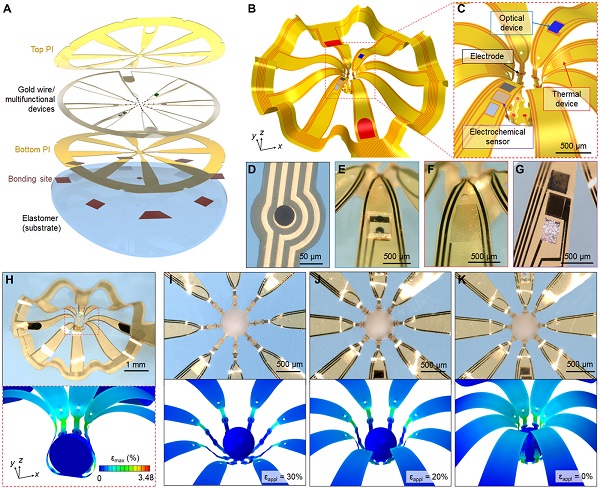 (A) Tilted exploded view layout of the constituent layers of the 2D precursor to the corresponding 3D MMF.

(B) Results of FEA of the system in its final configuration and (C) a magnified view to highlight the functional components that include 25 microelectrodes, along with devices to provide optical, thermal, and electrochemical capabilities. Optical micrographs of each device.

(H) Optical image of the 3D mesostructure with 25 electrodes and the distributions of maximum principal strain according to FEA across the 3D MMF and the spheroid. Optical micrographs and corresponding FEA results at different stages of the process of enclosing the 3D MMF gently around the surface of the spheroid; from left.

(I) opening the 3D MMF by stretching the elastomer substrate and placing the spheroid in the center region.

(J) slowly releasing the substrate to cause the structure to begin to enclose the spheroid.

(K) completing the release to conclude the integration.

Dr. Colin Franz would like to congratulate Kristen Cotton, BS Research Lab Assistant, on her significant contributions to this project.