In 2014, Sudha and Jayendra Panchapakesan were a power couple in the arts community of Chennai, India. Jayendra was a writer and director who had created popular movies and music videos; Sudha was head of human resources at Qube Cinema Technology, an established company cofounded by Jayendra.

Then, two days before her 50th birthday, Sudha collapsed at a salon and was rushed to the hospital. A clot in her carotid artery caused a stroke. Doctors discovered that the left side of her brain had swollen and was putting pressure on the right side. They performed emergency surgery.

Days later, after surgery, Sudha was recovering in the intensive care unit with Jayendra at her side. “I realized that while she could recognize me, she couldn't communicate,” Jayendra told The News Minute, an Indian newspaper. “She was not able to talk or understand what I was saying."

Sudha’s stroke had caused aphasia, which impairs the ability to process and understand language, including speaking, reading and writing, while leaving intelligence unaffected. The condition most commonly accompanies stroke, but is also seen in the aftermath of a wide range of neurological conditions, including brain tumors and traumatic brain injury. Among people who have had a stroke, approximately one-third experience aphasia. While the National Institutes of Health estimates that one million Americans have the condition, many experts agree this number is much higher and is poised to increase worldwide with the growing incidence of stroke.

In India, very few doctors inform their patients about aphasia, and very few therapists know how to treat the condition. Jayendra immediately began researching treatment options abroad. “Our focus was always, ‘How we do we get better? How do we go on from here?’” he said.

Through a friend, Jayendra learned about the Intensive Comprehensive Aphasia Program (ICAP) at Shirley Ryan AbilityLab. He arranged a video chat with Leora Cherney, PhD, scientific chair, Think + Speak Lab, and director of the ICAP, to see if Sudha would be a good candidate for treatment.

“At that time, Sudha couldn’t say a word, but she showed signs that she would be able to benefit from the program.” Dr. Cherney said.

Weeks after surgery, Dr. Cherney accepted Sudha into the program, and her first ICAP treatment started in April 2015.

The ICAP consists of intensive interventions. In a typical session, 10 individuals with aphasia undergo 120 hours (six hours a day, five days a week, for four weeks) of individual and group aphasia therapy. Throughout the program, ICAP participants work with licensed, certified speech-language pathologists who are experts in aphasia treatment.

One facet of the ICAP that really sets it apart is the opportunity for group interactions. In these moments, participants make meaningful connections with others who are experiencing similar circumstances.

“People with aphasia don’t usually get to meet others with the condition, but doing so gives them confidence to fight the battle,” Dr. Cherney said.

Sudha has stayed in touch with several friends she’s made from the ICAP, using video-chat technology to connect with them from her home in India. As she lists the names of a few of those with whom she stays in touch using FaceTime, Jayendra’s face brightens.

“She’s always been better at names than me,” he said. 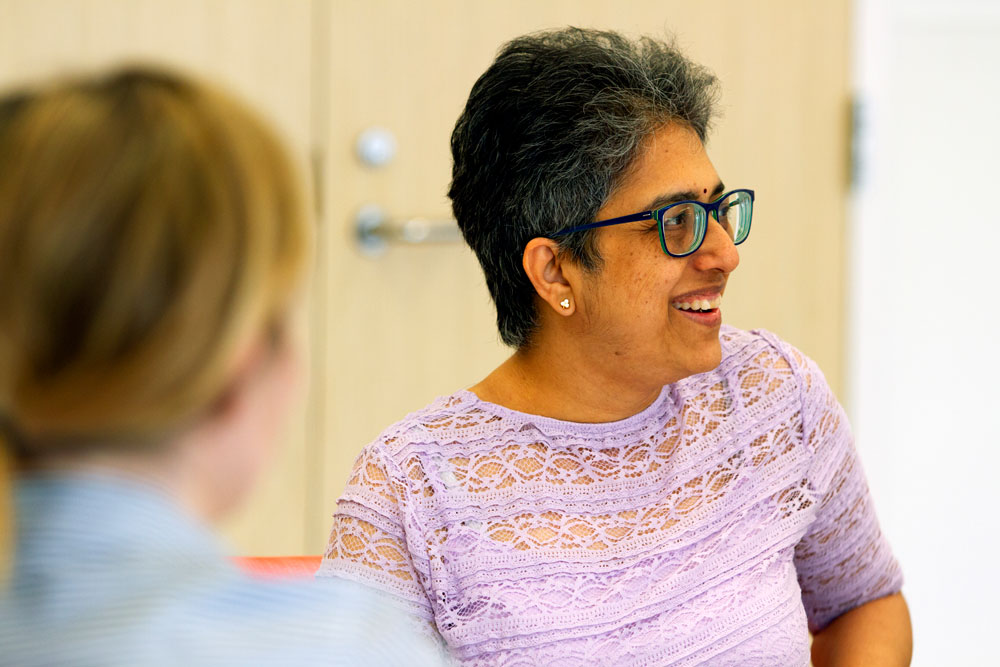 ICAP sessions conclude after four weeks, but Dr. Cherney stresses that this is not the end of participants’ affiliation with the program.

“The ICAP goes beyond that,” she said. “We keep in touch. We send practice work home with participants. We provide information to patients and caregivers. It’s more than a one-month program.”

In fact, many individuals with aphasia return to the ICAP for follow-up sessions — “tune-ups,” as Dr. Cherney calls them.

This August, Sudha and Jayendra returned for Sudha’s sixth ICAP session. This time, they were participating in a new offering — what Dr. Cherney calls a “mini-ICAP” — for patients who have attended previous ICAPs and wish to get more focused, intensive treatment. Mini-ICAPs are three weeks long instead of four, and activities are targeted to individuals’ specific goals. Sudha’s mini-ICAP consisted of four and a half hours per day of individual therapy, a reading and writing class, and a computer lab, with a focus on her use of verbs and chaining words together.

The goal this session was to help Sudha get to the point at which she was able to speak in more complete sentences. She continues to make progress saying more words and sentences.

Sudha’s word of advice to others experiencing aphasia? “Try.”

“You have to see the incremental progress and celebrate every achievement,” Jayendra said. “If you put in the hard work, you’ll get better. Don’t give up.”

Aphasia Therapy Groups & Classes provide an opportunity for individuals who are living with aphasia to practice their communication skills with others in both casual or intensive environments.

At 30 years old, Kyle experienced a rare brainstem stroke causing a condition called locked-in syndrome. Although his cognitive abilities were completely intact, he was unable to move or talk.