Is there a way to turn back the clock on aging?

In the past, Dr. Lavasani developed a new approach to stem cell therapy. Instead of injecting stem cells directly into the tissues of aging mice — which is the typical method used by researchers to test stem cell therapies — Dr. Lavasani injected stem cells into older mice in a manner that allows them to circulate systemically. The result: the test subjects’ inflammation decreased, regenerative cells flourished and cartilage regrew, leading to hope that osteoarthritis can be reversed.

Now, thanks to this NIH R01 grant of $2.4 million over five years, Dr. Lavasani will greatly expand her study of how systemically injected stem cells and their secreted therapeutic factors can extend lifespan of older mice and delay onset of neuromuscular diseases and syndromes related to aging, such as sarcopenia, peripheral neuropathy, amyotrophic lateral sclerosis and multiple sclerosis.

“Our goal is to facilitate the discovery of novel stem cell-based therapeutic targets for clinical use,” she said. “If successful, the scientific contribution will be significant for basic science as well as geroscience, the study of how aging affects sickness and health.” 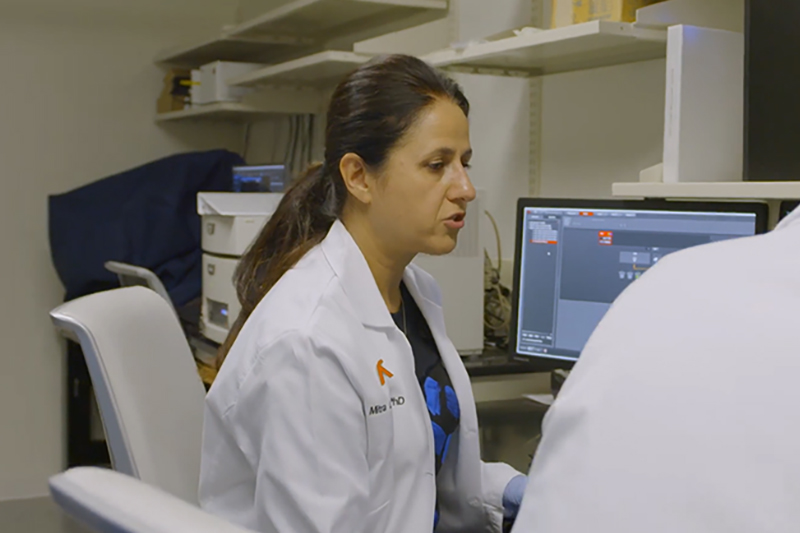 Dr. Lavasani said the funds will be used to hire additional lab staff with specialized skills and expertise, and procure additional materials and supplies like an Orbitrap Fusion Tribrid Mass Spectrometer. This cutting-edge device will make it possible for the Translational Cell Therapy Lab team to simultaneously identify and quantify thousands of proteins from aged musculoskeletal tissue samples before and after systemic stem cell transplantation, and proteins secreted from young stem cells.

The Significance of Earning an NIH R01 Grant

Not only do R01 grants provide guaranteed funding to researchers, they also act as an imprimatur of official validation — proving that the scientific community acknowledges the promise in their discoveries.

“I was relieved and gratified to see many years of hard work, dedication and perseverance finally pay off,” said Dr. Lavasani, of when she learned her R01 grant application had been accepted. “I’m very proud of my team and our collaborators for putting together a compelling project that received such strong support from the NIH — not only were we funded, but the application received a score in the top 5 percent! It makes me believe that we’re on the right path toward our ultimate goal of improving human health.”

Others in our organization have earned R01 grants, but Dr. Lavasani’s is a first for Shirley Ryan AbilityLab’s Biologics Lab.

“Obtaining R01 funding is the national ‘gold standard’ for researchers trying to prove their mettle in academic systems,” said Richard Lieber, PhD, chief scientific officer and senior vice president. “The field of stem cell biology and aging is tremendously competitive. Mitra’s fundamental discoveries could have dramatic impact on our patients.”

The Catalyst Grant Program at Shirley Ryan AbilityLab empowers employees from every area — from clinical and research to administrators, chaplains and housekeepers — to develop innovative solutions for specific problems of various sizes. Catalyst Grants are one aspect of the Research Accelerator Program, which aims to translate research into practice.

Thanks to Catalyst Grant funding, Dr. Lavasani was able to use sophisticated proteomic analysis to identify the exact type of proteins made by her stem cells, and pinpointed candidate proteins that might be responsible for the anti-aging effect being spurred in mice.

“My story is a perfect example of how early funding not only spurs discoveries, but also leads to more funding,” she said. “Without the seed money I received, it would have been almost impossible to secure the significant multi-year grants I’ve received since. The early funding provided the jump start to accelerate my research.”

In the News: Dr. Hargrove Featured on CNBC

Patients were often very forgetful, struggling with the sort of "brain fog" that would often make it difficult to find the words to express themselves. Dr. Colin Franz, a physician-scientist with the Shirley Ryan AbilityLab in Chicago, said the findings dovetail with his own experience with COVID-19 survivors.

Rehab facilities across the country have started to take in long Covid patients during the pandemic. The Shirley Ryan AbilityLab in Chicago, one of the country’s top rehab centers, went so far as to open a wing dedicated to Covid patients.