Current systems for controlling powered prosthetic legs require the user to manually transition the device between different walking modes. To go from level-ground walking to ascending stairs, for example, users must either perform specific unrelated body movements or use a key fob or a cellphone app to signal to the device that they want to change modes. These procedures make using the device unintuitive and laborious. When seated, the user must manually reposition their device for comfort or, for example, to transition into or out of a car.

Robotic powered prostheses have a number of built-in mechanical sensors that can gather information about the position, angle, and force exerted by the prosthetic joints. The information from these sensors can be analyzed by a computer algorithm that is able to learn and recognize patterns of sensor information generated during gait. Such pattern recognition technology can been used to accurately control powered devices. 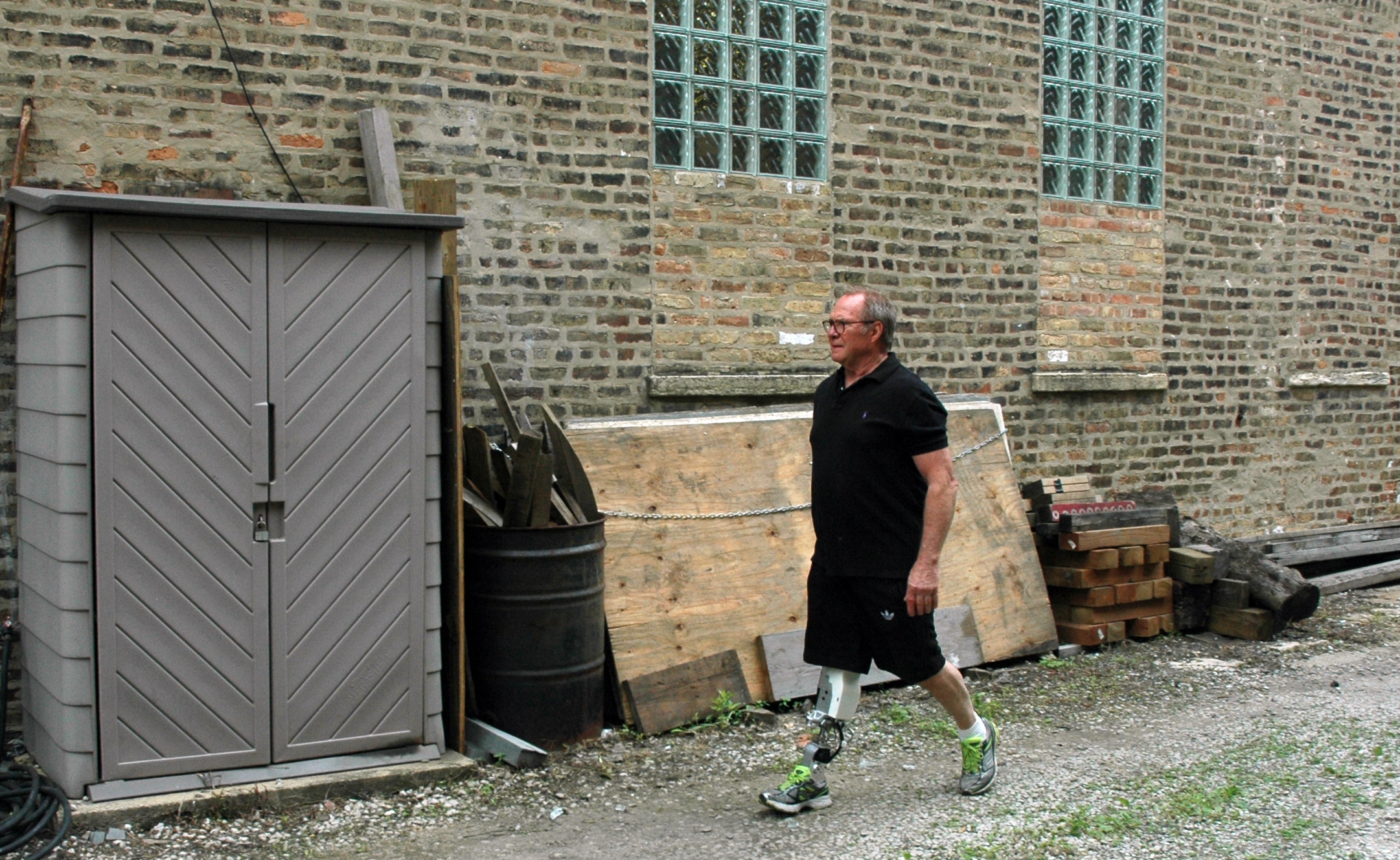 Moreover, these algorithms can also use neural information from the user to improve control of the device. When users move their residual limb to walk, their remaining muscles generate electrical signals (called electromyographic, or EMG signals). Similar to the mechanical sensor information, EMG data recorded from several muscles generates patterns that are specific to the type of movement being attempted. By combining EMG and mechanical sensor data, pattern recognition algorithms can recognize the patterns and control the prosthesis with far fewer errors. In addition, because EMG signals are generated a split second before movement is initiated, these signals can be used to predict upcoming transitions, enabling the user to seamlessly change to a different walking mode simply by attempting to do so—just like walking with an intact leg. Finally, when the user is seated, EMG signals alone can be used to reposition the leg as desired.

Our current research goals include refining the control system to reduce errors even further, developing algorithms that require less extensive training, and creating an adaptable algorithm that can not only learn to recognize signal patterns but can learn from previous classification mistakes, so that the system becomes more reliable over time.

NIH R01HD079428-01
Adaptive Recalibration of Prosthetic Leg Neural Control System
Our goal is to understand what type of information is required to adequately adapt neural control systems for advanced powered prosthetic limbs. We will then use this knowledge to optimize an embedded system hardware capable of supporting adaptive algorithms being developed with a synergistic project (US Army W81XWH-14-C-0105).

NSF NRI
NRI: Small: Computational Motor Control for Better Control of Prosthetic Devices
The goal of this project is to a better understanding of the performance and limitations of existing prosthetic control systems within the principled framework of computational motor-control, and (ii) improved prosthesis control through the development of novel interface dynamics and haptic sensory cues.

US Army, W81XWH-14-C-0105
Configuration and Adaptive Recalibration of Lower Extremity Neural Control Systems
Our goal is to advance this research prototype, which requires daily recalibration, to a clinically viable system that adapts to changes in patients‘ EMG signals. At the end of this project we expect to have developed an adaptive neural control system that is ready for home-trials by injured service members.

MR140057
Development of an Engaging Training Tool to Provide Superior Muscle Computer Interfaces for Rehabilitation of Neuromusculoskeletal Injuries
The objective of this proposal is to develop an optimized pre-prosthetic training program that will increase the functional abilities of amputees and improve myoelectric prosthesis utilization.

Spanias JA, Perreault EJ, and Hargrove LJ. A strategy for labeling data for the neural adaptation of a powered lower limb prosthesis. Engineering in Medicine and Biology Society (EMBC), 2014 36th Annual Intl Conf of the IEEE, 2014.