As a child growing up in Hong Kong, Virginia Chu’s mother often gave her books that described the serendipitous and thrilling nature of scientific research: she remembers reading about Marie Curie’s pioneering career, Thomas Edison’s determination, and Einstein’s brilliance but silly mistakes, such as cooking his watch instead of the egg that he wanted to eat.

“I was a very forgetful and clumsy kid, so that made me feel like even great people make silly mistakes, and it’s okay,” Chu laughs.

Chu went on to study both biomedical engineering and occupational therapy for her undergraduate and graduate education, gaining knowledge to bridge the distinct but integrated worlds of applied science and medicine. She is now a pediatric occupational therapist and Assistant Professor in Health Professions at Virginia Commonwealth University. An underlying goal of Chu’s research is to develop novel techniques that help clinicians better understand and treat human movement disorders. Most recently, in pursuit of this goal, Chu was awarded a pilot project from C-STAR to study ways to track “tummy time,” an important play position that helps infants develop their muscles and motor control.

“While we understand the importance of tummy time in infants, we do not have accurate ways to track the amount of time infants spend playing on their tummy,” Chu says, adding that current measures rely almost solely on parental observation, which lacks objectivity. Accurately assessing tummy time may help clinicians identify and perhaps detect or treat motor related developments more accurately and faster. 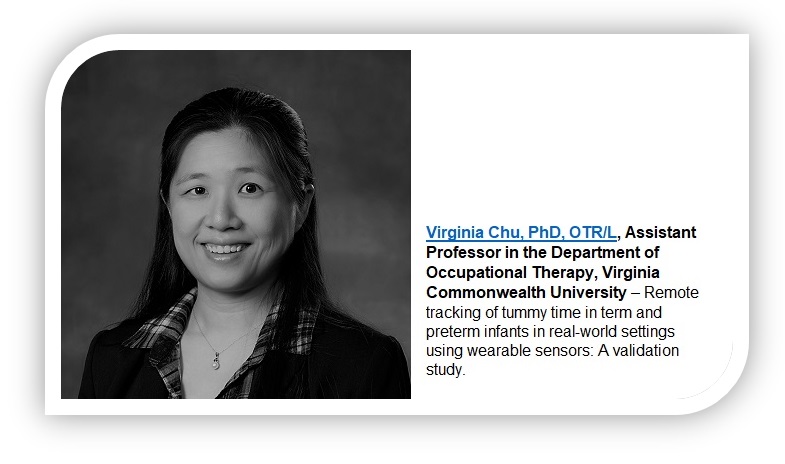 Chu was one of four scientists to receive an award through C-STAR’s inaugural pilot project funding. For her project, Chu will use commercially available wearable sensors with a specific set of algorithms modified for home use to investigate if sensors can continuously and objectively monitor infants in their natural settings. She will compare how accurate the sensors measure tummy time compared to data from parents by reviewing video recordings. “The results of this study will inform the use of wearables for remote infant assessment and allow for monitoring of development in preterm infants through telehealth,” she explains.

Chu notes that participating in a Shirley Ryan AbilityLab Buzz Lab, where scientists and clinicians met together virtually to discuss her project, provided her with insight on how to handle the large amounts of data she needs to collect and analyze for her project, including video data, synchronization of video, and sensor data. Because of the feedback she received during the Buzz Lab, she was able to preemptively address some of the complications that often arise when collecting large amounts of data. “We have also spoken to several of the researchers further on some of these challenges and received valuable advice from them,” she adds.

In the next 5 -10 years, Chu hopes to see some of the measurement tools she develops implemented in broad clinical use. She also hopes to find her village – just as she found a world of scientific discovery in the books she read as a child.  “Research is now moving more and more towards team science,” she says. “As a relatively new researcher, I am still finding my place in the scientific world, and finding my team and my village.”

Fun facts: With a 3-year-old at home and a passion for healthcare and engineering, much of her spare time is spent crafting, tinkering with gadgets, and learning activities for the children in her life.