Develop a robotic, power-assist lever drive for a manual wheelchair that people with severe upper extremity impairment can use to both  exercise and ambulate. 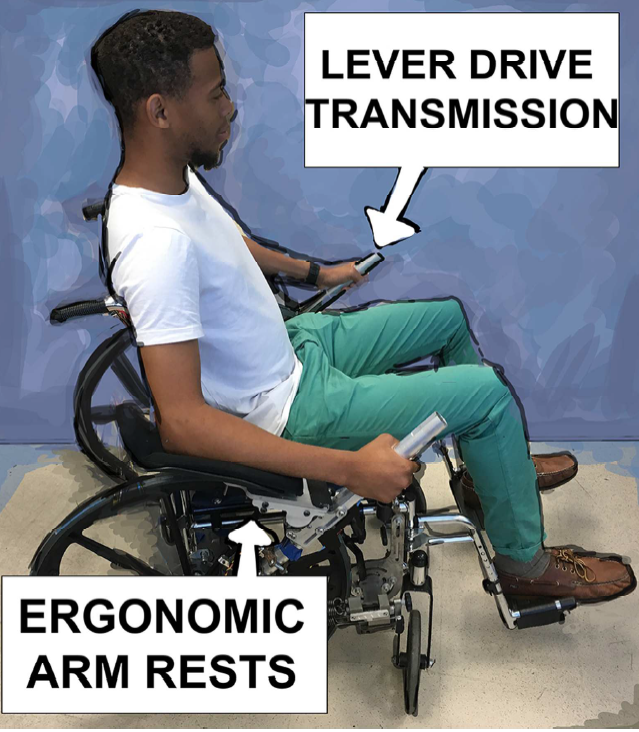 Stroke inpatients spend on average about 4-5 hours between 8 and 5 PM sitting; about 2 of these hours are typically inactive. The key idea of our technology, which we believe should and will eventually become the standard wheelchair used for all stroke inpatients, is to facilitate arm activity by replacing the standard manual wheelchair that stroke patients typically sit in with a specially-designed lever-drive chair.

We recognize that this first assertion, that people with severe hemiparesis can use their impaired arm to propel and control a manual wheelchair, may seem doubtful. Indeed, at present they currently ambulate in manual wheelchairs using their feet and/or less affected arm or by being pushed by a caregiver. Neither approach contributes to recovery of the hemiparetic upper extremity.  Nevertheless, much to our and the user's’ surprise, it is possible to learn to propel LARA with a very severely impaired limb.

We hypothesize that users will thus achieve thousands more arm movements than is current practice, reducing their arm impairment.

The device is being further developed with NIH Phase 2 SBIR funding by the start-up company Flint Rehabilitation Devices.