Dr. Deborah D. Grison, a college professor of English Literature, was attending a poetry reading in New York City when the mystery finally started to make sense. For 12 years, she knew something wasn’t right, as she experienced tingling in her hands, legs, toes and torso. She thought fibromyalgia or lupus were perhaps to blame; she had even drastically changed her lifestyle and diet, losing 175 pounds, in an attempt to counteract symptoms. Despite these efforts, her symptoms persisted.

At the poetry reading, a fellow attendee noticed Deborah’s gait and simply asked, “MS?” She was referring to multiple sclerosis, which is characterized by an abnormal response of the body’s immune system directed against the central nervous system. The disease can lead to a range of debilitating symptoms, including numbness or weakness of limbs, partial or complete loss of vision and paralysis.

A subsequent week-long hospital stay and battery of tests confirmed that Deborah did in fact have the disease. From there, she experienced a range of mobility challenges, depending on a cane, and sometimes a wheelchair, to navigate. Then, two falls and subsequent knee surgeries rendered her temporarily unable to walk. Deborah, a Chicago native, knew she would need aggressive physical therapy to get back on her feet. A friend suggested the Rehabilitation Institute of Chicago (RIC) as the best place for her to seek care.

In October 2015, Deborah began outpatient therapy at RIC, where she continues to this day. In the beginning, she walked with a four-wheeled rollator walker, but had challenges with her right foot, which dragged on the ground as she became fatigued. Without the support of her walker, she could barely keep her balance. From the onset, the interventions her team developed have been guided by two arms of research evidence — that higher intensity walking and balance training lead to better outcomes (based on studies pioneered at RIC), and that regular physical activity are paramount for an increased chance at recovery.

The therapy is intense, but has turned everything around,

Deborah’s physical therapists focused on increasing the duration and intensity of her walking training in an effort to improve her speed and endurance. Initially she worked on the balance bars to improve balance and walked with the help of a harness. Her team recommended an orthotic to help stabilize her right foot to help reduce dragging.

“The therapy is intense, but has turned everything around,” said Deborah. “I’ll never forget a session when my therapist said he would have me walk backward with my walker. I thought, ‘What are you talking about?’ thinking the intensity would be too much. But I did it.”

From there, Deborah began focusing on more complicated tasks, such as side-stepping, ambulating on different terrains (e.g. cushions, grass) and walking on uneven surfaces. She progressed from using her walker to forearm crutches to walking sticks as her balance and strength improved. Earlier this year, Deborah joined RIC’s Adaptive Sports and Fitness Program, where she works out three times a week. She also has become involved in various adaptive sports, from archery to sailing.  Deborah Grison 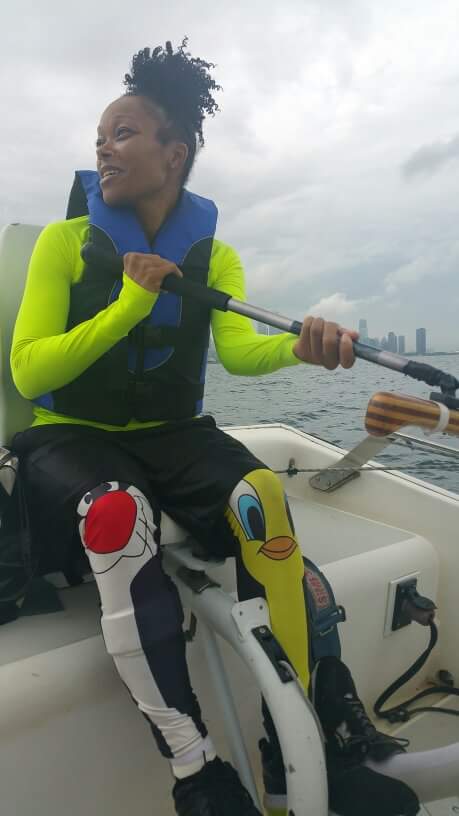 Best of all, her MS is in remission, and she has not experienced an exacerbation since moving home to Chicago a year and a half ago. Deborah is spending her time traveling and giving talks about her healthy lifestyle philosophy, which she calls “Eat Life.” Most recently, she visited St. Croix in the Virgin Islands, where she enjoyed swimming in the ocean and hiking in the rain forest. She hopes to one day return to the classroom as a professor.Deborah Grison 2

“Tell me, ‘No,’ and that means I must,” said Deborah. “When there is a mountain, I will climb it — because I can show you better than I can tell you!”

For more about Adaptive Sports

Surprise on the Ice After Blackhawks Victory with Kevin and Erica

After meeting more than 10 years ago through our Blackhawks Sled Hockey team, Kevin proposed to Erica after a victory on the ice.

Brad's Story: Back on the Bike

Two Years After Tragedy, A Former Patient Runs the Marathon