After officially joining Shirley Ryan AbilityLab as an attending physician-scientist in 2021, Ishan Roy, MD, PhD, practices clinically in the Cancer Rehabilitation Clinic and focuses his research on cachexia (pronounced ca-kex-ia).

This muscle-wasting syndrome can lead to functional decline in people who have chronic diseases, including chronic lung disease, heart failure and kidney failure. Dr. Roy's focus will be on cachexia related to cancer.

"Everyone recognizes that weight loss is part of the equation with cancer," said Dr. Roy. "But, in reality, it's part of a much bigger picture called cachexia syndrome. My research goal is to understand the physiologic mechanisms that lead to functional decline for these patients — and learn how to counteract them. Our hypothesis is that cachexia is a key factor in functional decline."

Read below to learn more about Dr. Roy's research.

How common is cachexia in those with cancer?
Close to half of patients with cancer have cachexia at some point during their disease course, while about 30 percent of cancer-related deaths can be tied directly to this syndrome. The truth is, when people die who have cancer, it's often not from the overwhelming burden of the disease; instead, it's from secondary issues. Many people who treat cancer focus on how to attack the tumor, but there are not as many people who focus on treating issues caused by the cancer or treatments. 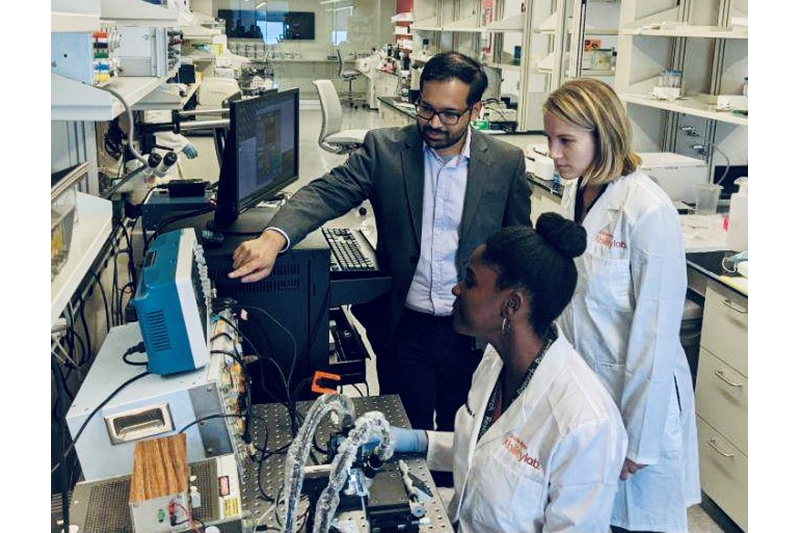 What causes cachexia?
Historically, people thought cancer acted as a vacuum for all of the person's nutrition, but it's actually much more complicated. In chronic diseases that lead to cachexia, the common theme is a high amount of inflammation happening at the systemic level, and that inflammation seems to take on a life of its own. It drives abnormal physiologic processes — not just in the muscle but also in the brain, liver, digestive system and endocrine organs. That systemic inflammation alone, however, is not what drives cachexia. We think there is a tipping point that happens in the body in terms of metabolism — something we are investigating in my lab.

Are there many other researchers investigating cachexia, or is it an emerging area of study?
Every year, the National Cancer Institute at the National Institutes of Health publishes a list of provocative questions it says do not get enough attention, and cachexia consistently shows up on that list. While there is a relatively tight-knit international community of researchers studying this syndrome, it's a small part of the world of cancer research. And, certainly, there's almost no one addressing it from the perspective of rehabilitation or physiatry. From a clinical standpoint, I’m trying to see patients who have cachexia or cancer fatigue and provide them all the resources that we have in this hospital together in a much more concerted fashion.

How did you become interested in researching cachexia causes and treating patients with cancer?
The lab where I did my PhD studied inflammation and cancer, and I was looking at how pancreatic cancer metastasizes. We were able to find interesting results in terms of how the metabolism of the tumor switches when it goes from the primary tumor site to metastasis. I thought: If the tumor is switching its metabolism based on this context, what's happening in the whole body at a systemic level?

Then, when I went back to my clinical training, I started to become a lot more interested in the treatment of patients with cancer. Cancer impacts so many people, and yet people with cancer often don't recognize their own issues with function. Part of the reason why I'm so interested in cancer from a rehabilitation perspective is to help patients identify those functional issues and improve their quality of life both during and after their cancer treatments.

I’m trying to see patients who have cachexia or cancer fatigue and provide them all the resources that we have in this hospital together in a much more concerted fashion.

What are your research priorities?
As a resident, I built a database of inpatients at Shirley Ryan AbilityLab who have cancer. We were able to use that to make observations about cachexia and recovery. First, we learned that about 75% of cancer patients we see in inpatient have some degree of cachexia. Second, we showed that most of those patients actually make a reasonable functional recovery during their inpatient rehabilitation stays. This insight suggests that what we do, just as a baseline, is helping these patients. The next steps are then determining how we can improve upon those benefit and come up with physiologically targeted treatment approaches to more profoundly improve function and quality of life.

In another project, I have started looking at the physiology behind cachexia. In 2019, I received one of the Foundational Grants from the Research Accelerator Program to develop an animal model of cachexia that would actually allow us to lead many more rehabilitation-related investigations. Now, we're starting to characterize that model more, and we'll soon be testing exercise interventions in a much more precise way.

Recovered quadriplegic from Chicago prepares to swim in San Francisco Bay to raise awareness of paralysis. ‘Doesn’t surprise me a bit,’ says mom.

From the beach where he swims on Lake Michigan, Rob Heitz can point out the green facade of the rehabilitation hospital where he began his recovery journey after being paralyzed from the neck down 19 years ago.

Six members of Shirley Ryan AbilityLab's recreational swim program — the Megalodons (named for the largest shark of all time, which lived at the time of dinosaurs) — recently won an outstanding 12 medals in Paralympic events at the Moved United Junior Nationals in Denver.